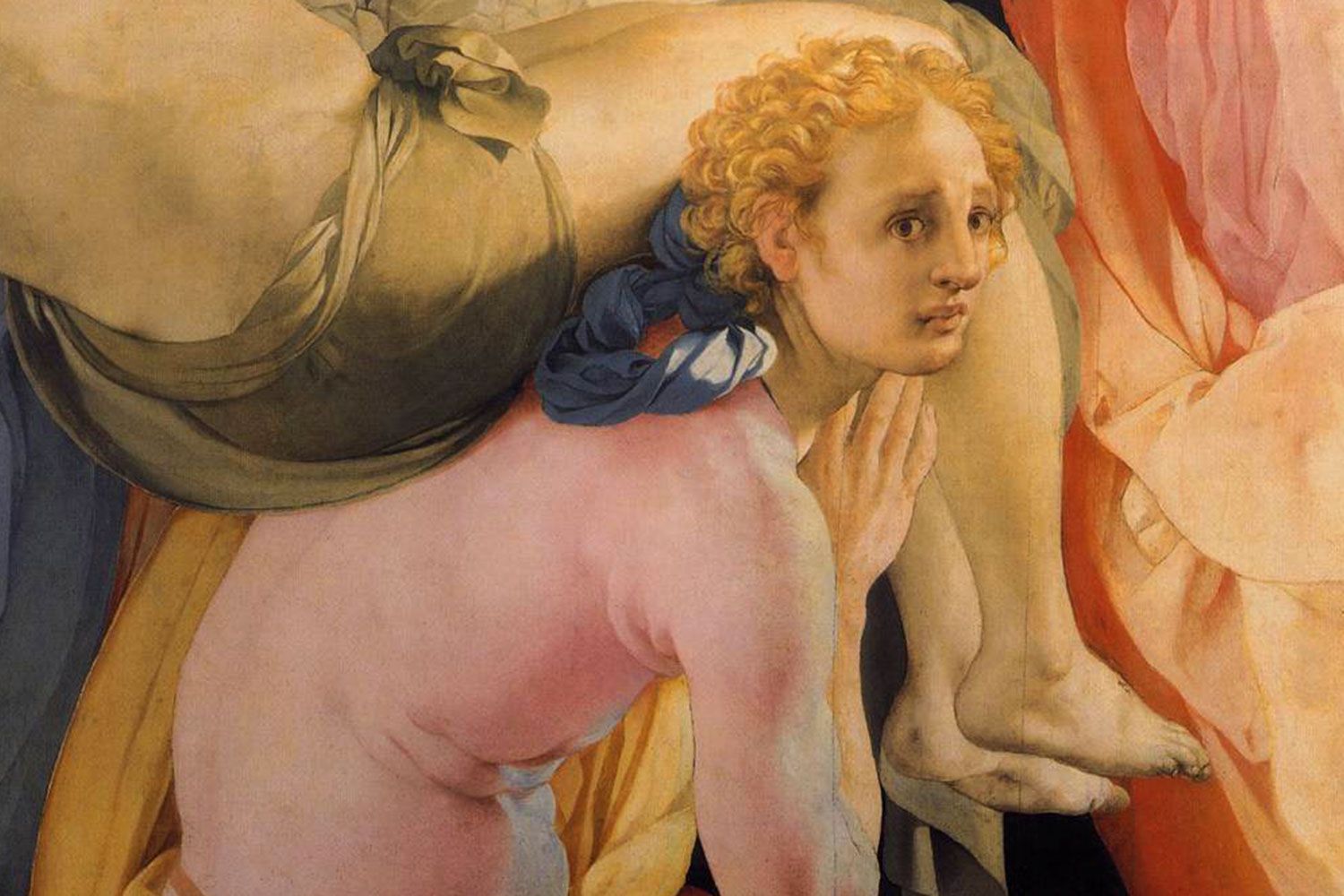 Painting of Pontormo in Florence

The Church of Santa Felicita in Florence is home to Jacopo Pontormo’s masterpiece, ‘The Deposition’ circa 1578. Seeing is believing but you won’t believe the genius of this work. When you see it. It is one of the artistic highlights of this city of art. 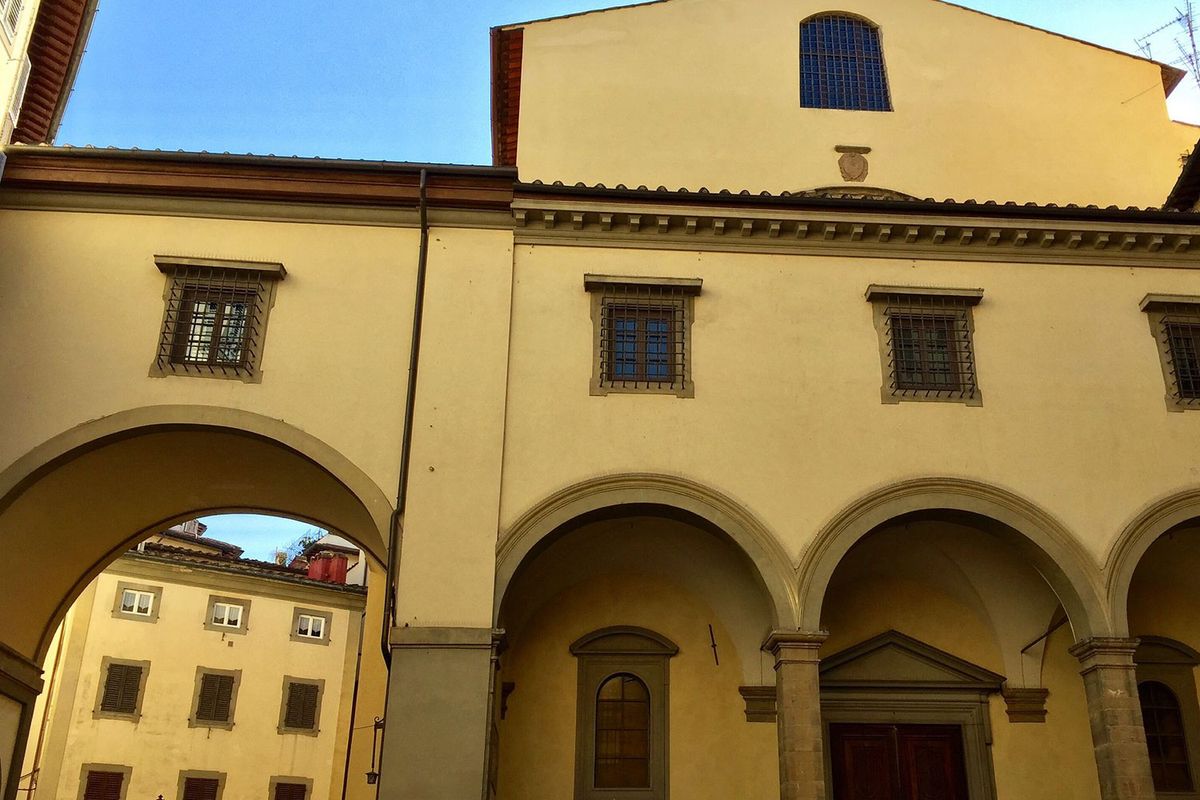 Jacopo Pontormo is certainly an artist ‘out of the box’ and one who evolved a unique style in both his drawing of the human form and his outrageous (for the time) choice and use of colour. His credentials were impeccable; born to the painter Bartolommeo Carrucci in 1494 he went on, according to Vasari, to study under perhaps the greatest of all Renaissance genius’ Leonardo di Vinci! Even Michelangelo spotted the youthful Pontormo’s work as something special. 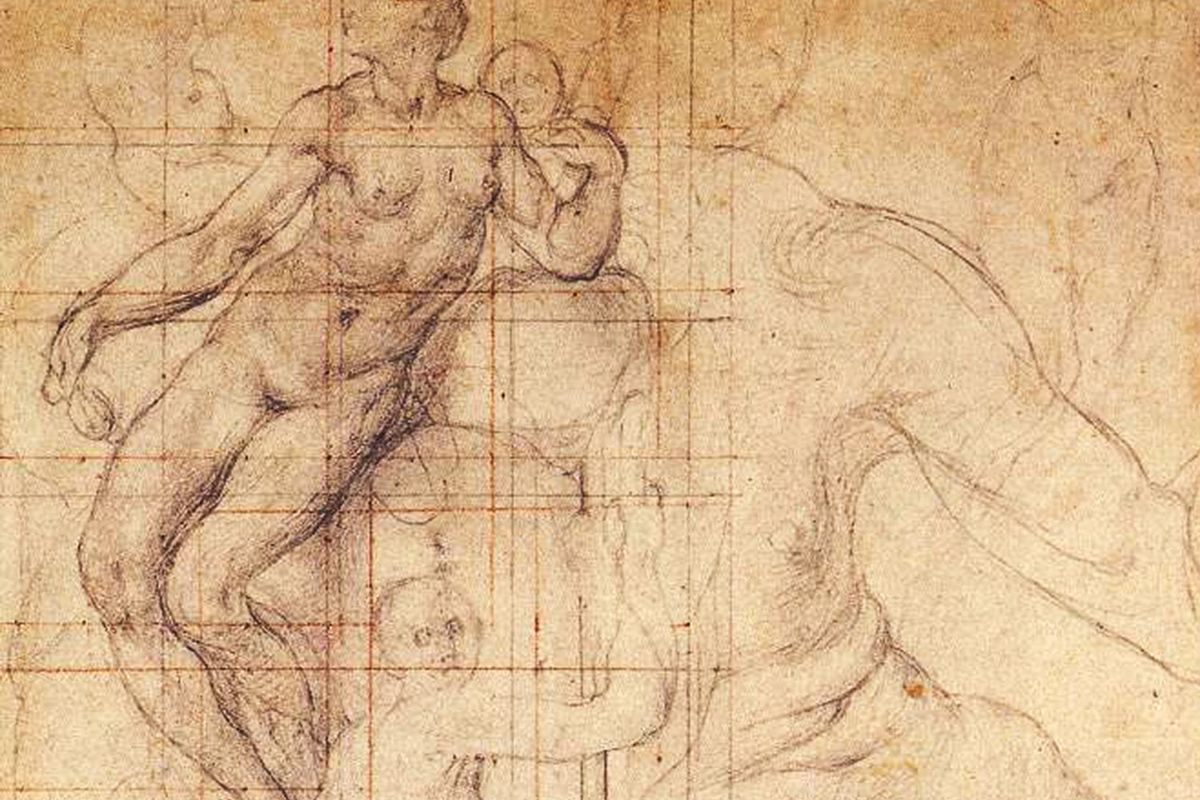 Ultimately, important artists of any generation break the shackles of their teachers and early influences to strike out and evolve a visual language that becomes their mark on the history of art. Pontormo certainly did this but not before absorbing the lessons of Andrea del Sarto whose workshop he visited and spent time in from the age of 18. Del Sarto’s deliberate use of the colours red, green, yellow and violet, were made to hang delicately together whilst conveying a strange, almost disturbing ‘aura’ to his work which had a profound and lasting influence on the young Portormo.

We see this clearly in Pontormo’s 1518 painting of ‘Joseph in Egypt’ (National Gallery of London) in the way the artist places his primary colours strategically around the composition to guide your eye to the central scene. Full of restless movement and contrary to the quiet perfection of Leonardo, Pontormo’s painting has more in common with the twisting, writhing statues of an aging Michelangelo. 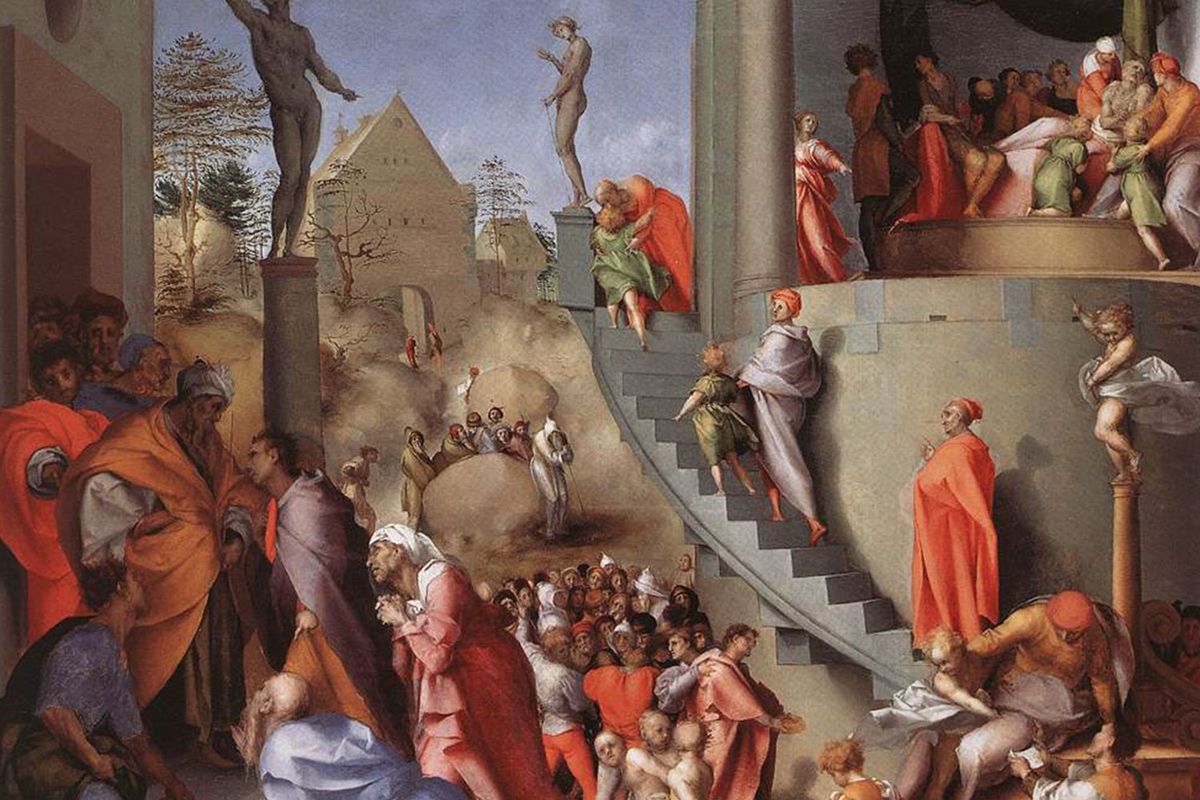 Joseph in Egypt 1518 by Pontormo in National Gallery in London

There is a little church on the Palazzo Pitti side of the Arno River in Florence, just a short walk from the Ponte Vecchio, called Santa Felicita. Built in the late 4th or early 5th century by a community of Syrian Greek merchants who had settled in this part of Florence in the 2nd century (many historians believe it was this community that brought Christianity to this city), the church of Santa Felicita is considered the second oldest church in Florence after San Lorenzo. You’ll notice as you approach the church from Piazza S. Felicita, the famous Vasari Corridor passes literally in front allowing the Medici to pause on their way home to the Pitti Palace and participate in a mass, far from the crowds and in comfort! 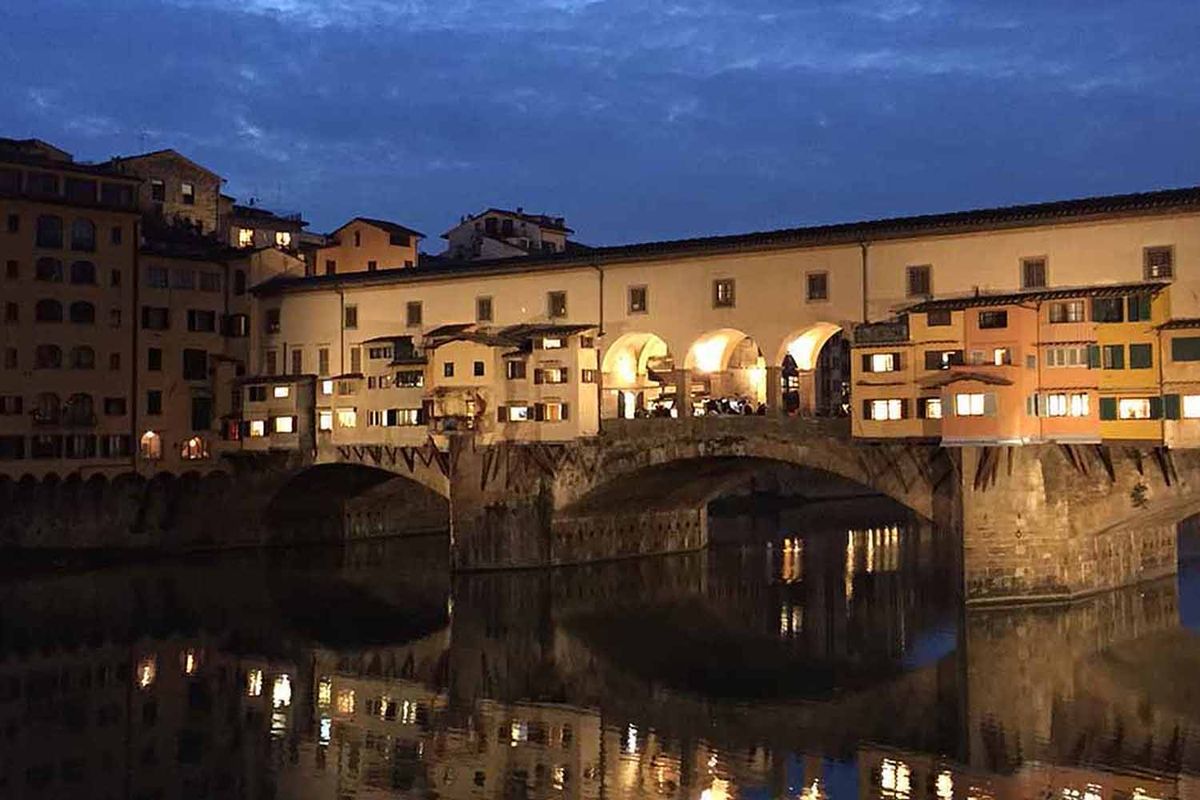 Enter this church and immediately turn to your right and you will be greeted by the Capponi Chapel, designed by Brunelleschi. If every painter has a masterpiece, then surely The Deposition, in this chapel is Pontormo’s! To be able to access this painting, with such ease, without crowds or an entrance fee is a delight and should be on any visitor to Florence list of things to see. To stand in front of it is to be in the company of one of the great paintings of the 16th century, often described as one of the key works of Mannerism. His choice of colour is both incredibly brave and mesmerizing! The whole scene floats delicately before your eyes, held together by the same sort of placement of the brighter or primary colours, we see in his Joseph in Egypt painting.

There is a poignancy of emotion and drama, as the figures struggle to remove the dead Christ from the cross, and yet if you look a second time there is no cross in this painting. You are invited to join the busy group of figures engaged in the tragic work of removing Christ from his place of execution, and be prepared to be perplexed, even confused when looking at this painting? Pontormo is playing with us. 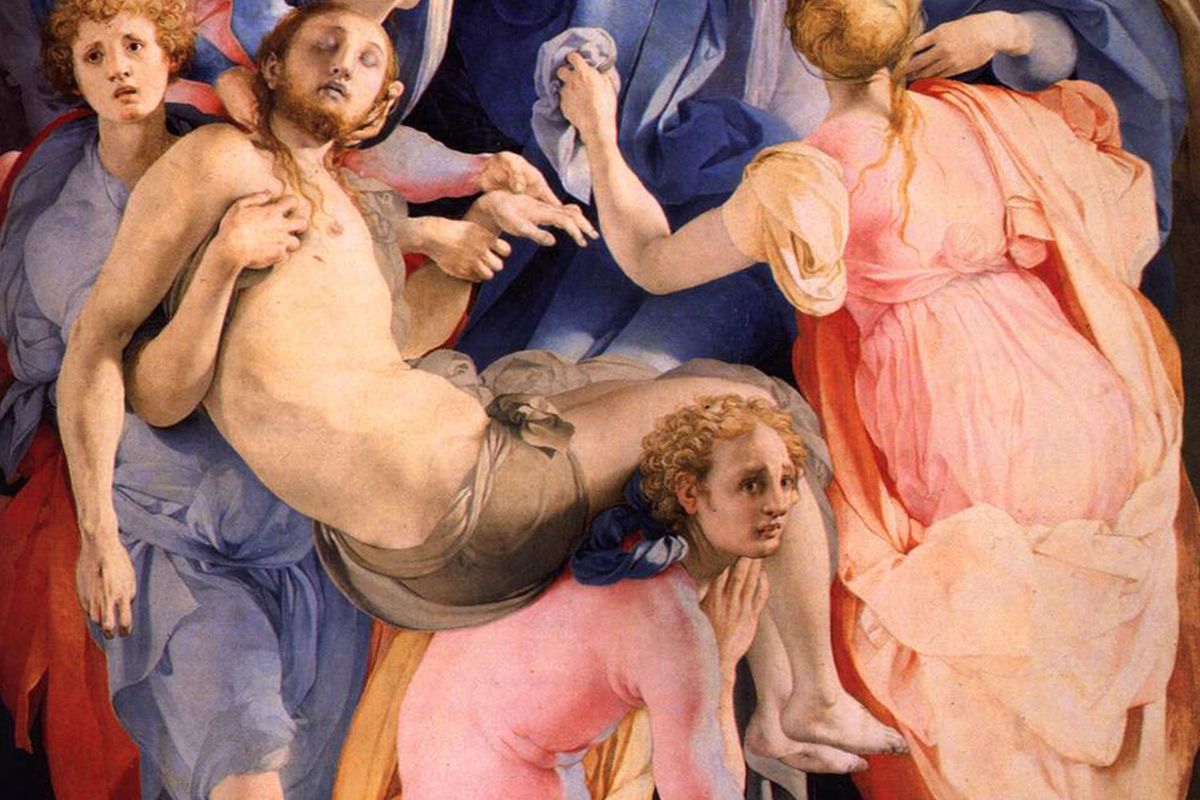 Christ lowered from a non-existent Cross in Pontormo's Deposition

His deliberate use of discordant colours and clashing tonal contrasts is almost irritating and yet the whole piece “hangs” together perfectly. And just as quickly we are seduced by a new way of painting, a new way to draw the figure that enhances the power of the subject. And soon, like so many before you, your eyes will move towards the tormented and dead Christ. Pontormo has achieved his end. 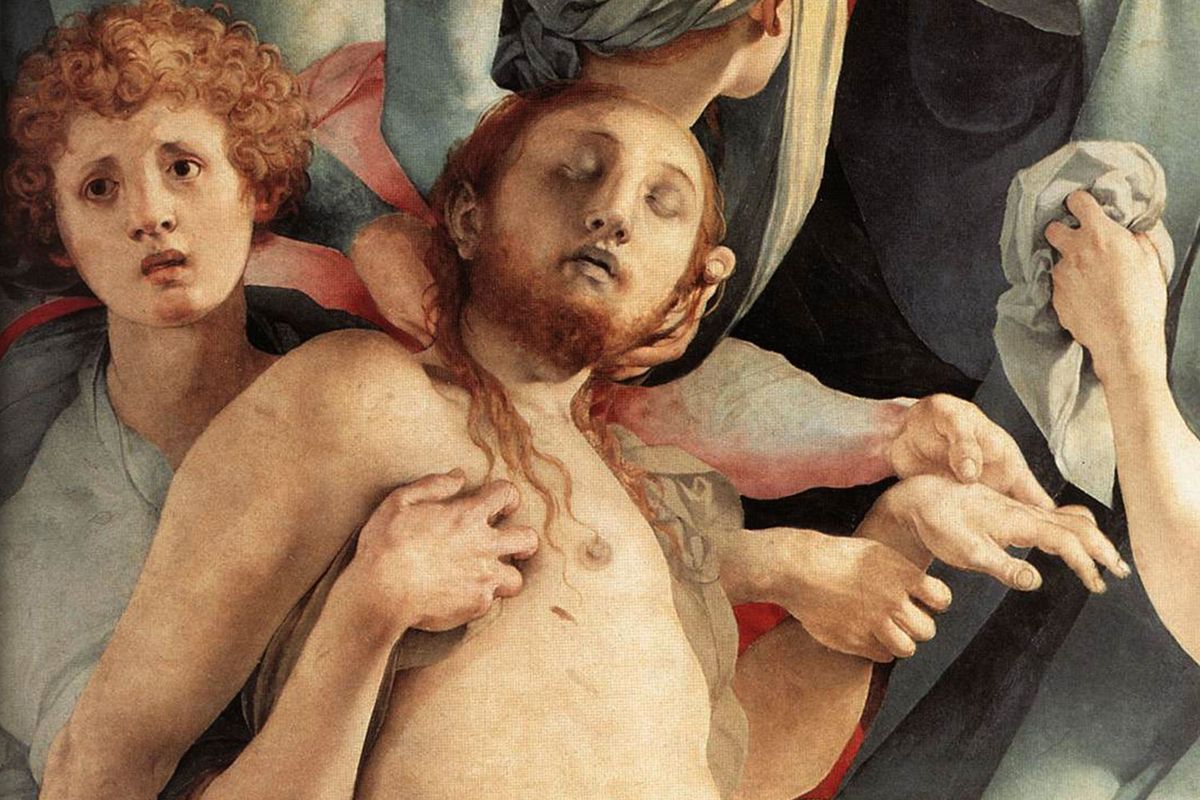 Detail of the Deposition by Pontormo in Florence
Location

Within the immediate vicinity of the Church are some very good gelateria that will ease the pain of visiting another church in Italy.