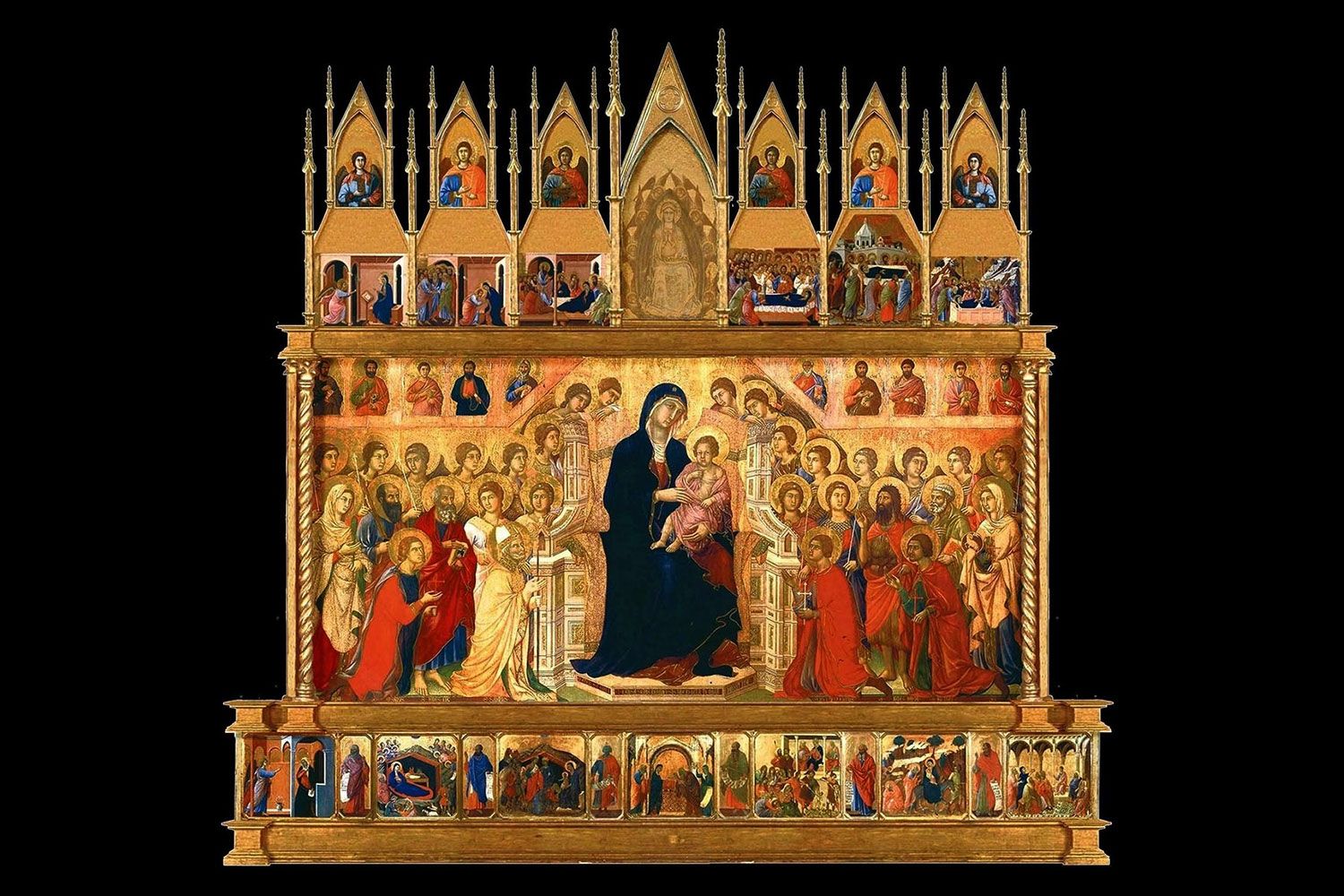 The Maestà by Duccio

On the 4th of October 1308 a contract was drawn up between the Cathedral of Siena and the painter Duccio di Buoninsegna. This document is preserved in the State Archives of Siena, where upon you can read the details of the most important commission for an artwork ever given, up to that date. 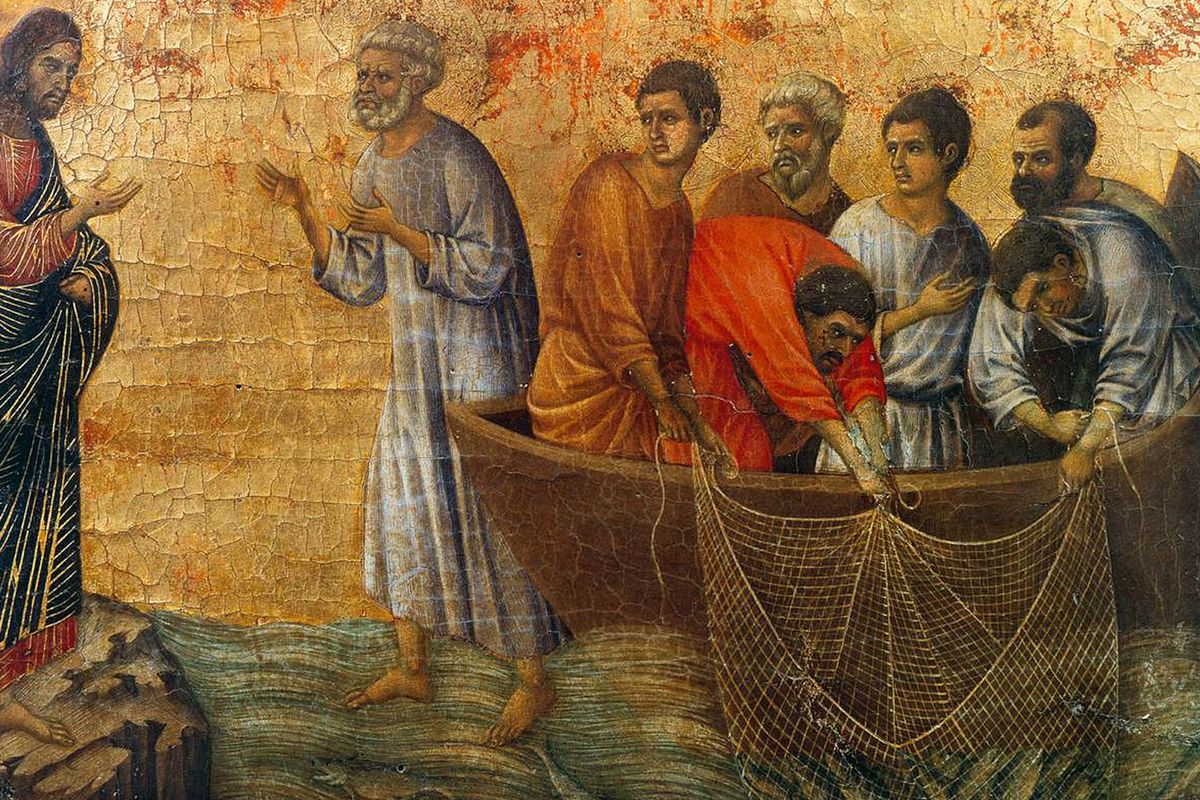 Appearance of Christ on Lake Tiberias. (Panel on the back of the The Maestà)

Because Duccio had a ‘difficult’ reputation and was prone to drink and fighting and did not take kindly to authority, Siena was determined that its greatest talent was to comply totally to the contract, with clauses such as: the painting should be entirely by the artists own hand, he must work uninterruptedly accepting no other work until the great picture should be completed. On top of which he had to swear upon a bible and agree to the contract in its entirety. A princely sum of sixteen soldi was paid to the artist and considering this one commission lasted years with extensions of payment until finished, was an important stream of income for this rebellious artist! 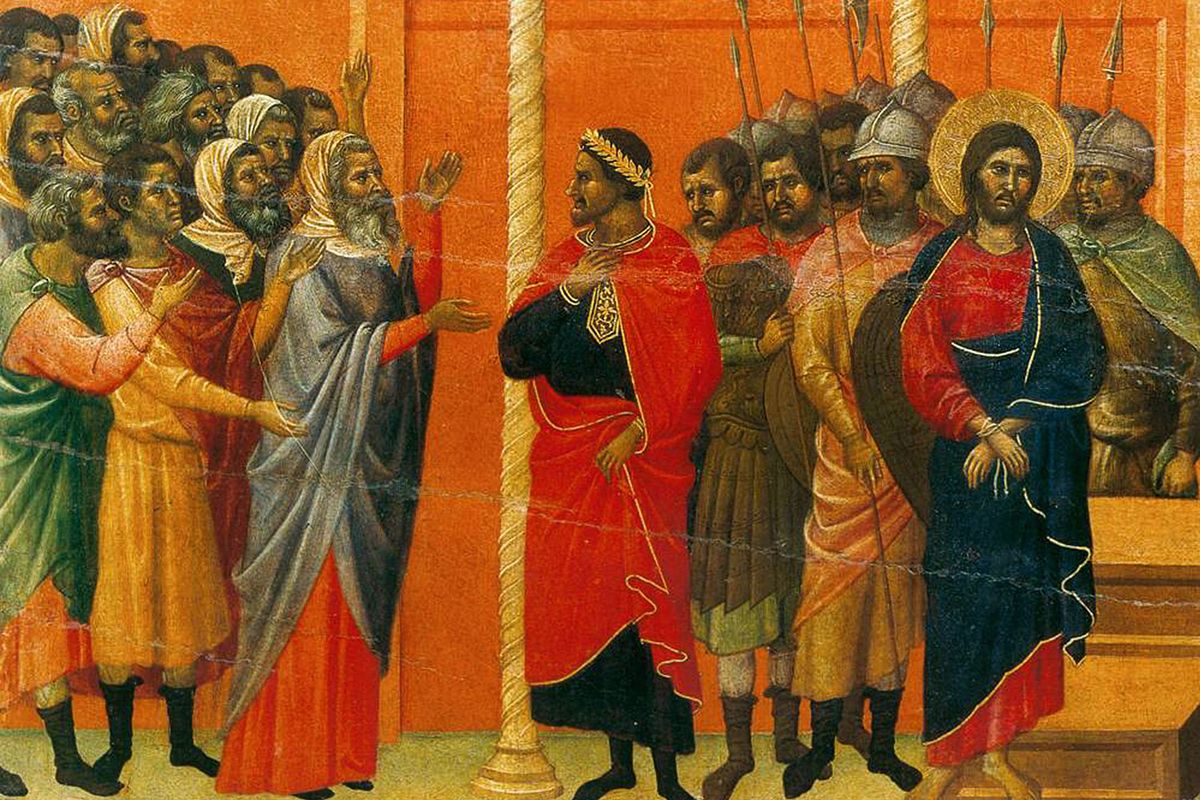 Christ Accused by the Pharisees. (On the back of The Maestà)

Upon completion of this great work the mid-14th century chronicler Agnolo di Tura del Grasso described The Maesta’ as “the most beautiful picture ever seen and made.” On August 1, 1771 the altarpiece was literally dismembered, with many panels split and separated. The scholar Guglielmo della Valle in 1785 protested against the havoc wrought and the damaged caused to The Maesta’ to no avail. In 1878 a number of those parts and panels of the original altarpiece, still in Siena, were brought together in the Museum of the Opera del Duomo where they remain to this day. 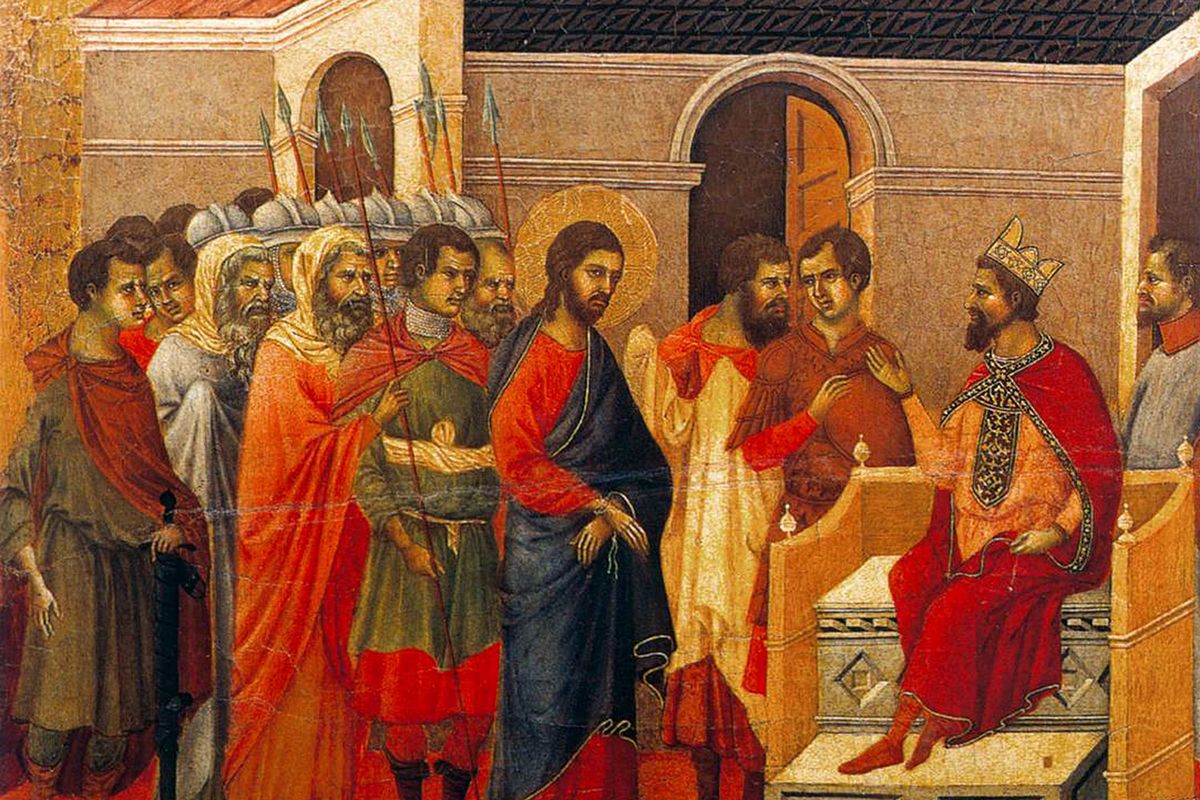 Christ Before King Herod. (On the back of The Maestà)

The front panels make up a large enthroned Madonna and Child with saints and angels, and a predella of the Childhood of Christ with prophets. The reverse has the rest of a combined cycle of the Life of the Virgin and the Life of Christ in a total of forty-three small scenes. Sadly, the restoration of this masterpiece remains incomplete with a number of the original panels now dispersed or lost. 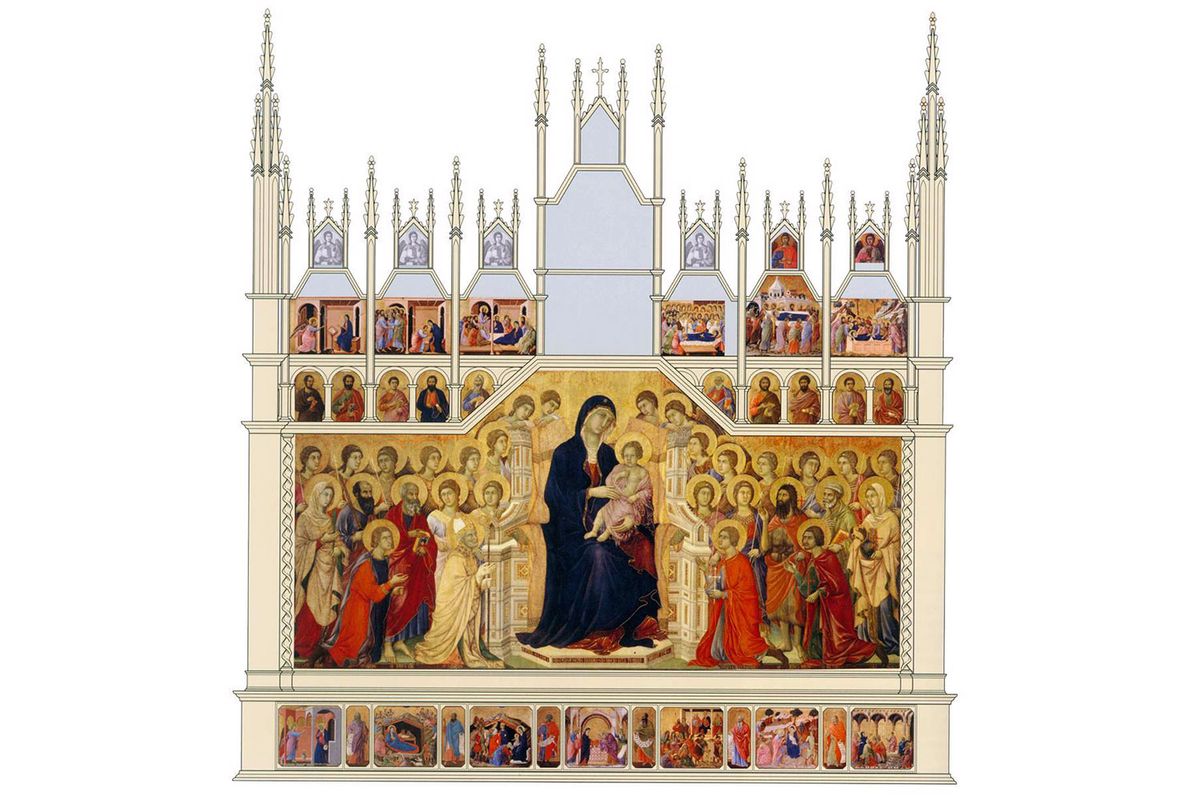 A digitized reconstruction of panels of the front of The Maestà.

The base of the panel has an inscription that reads (in translation): "Holy Mother of God, be thou the cause of peace for Siena and life to Duccio because he painted thee thus." This great work set in motion the beginning of the moving away from the “stilted” symbolism of Byzantine art in Italian painting, towards a more realistic and direct representation of the world and people. 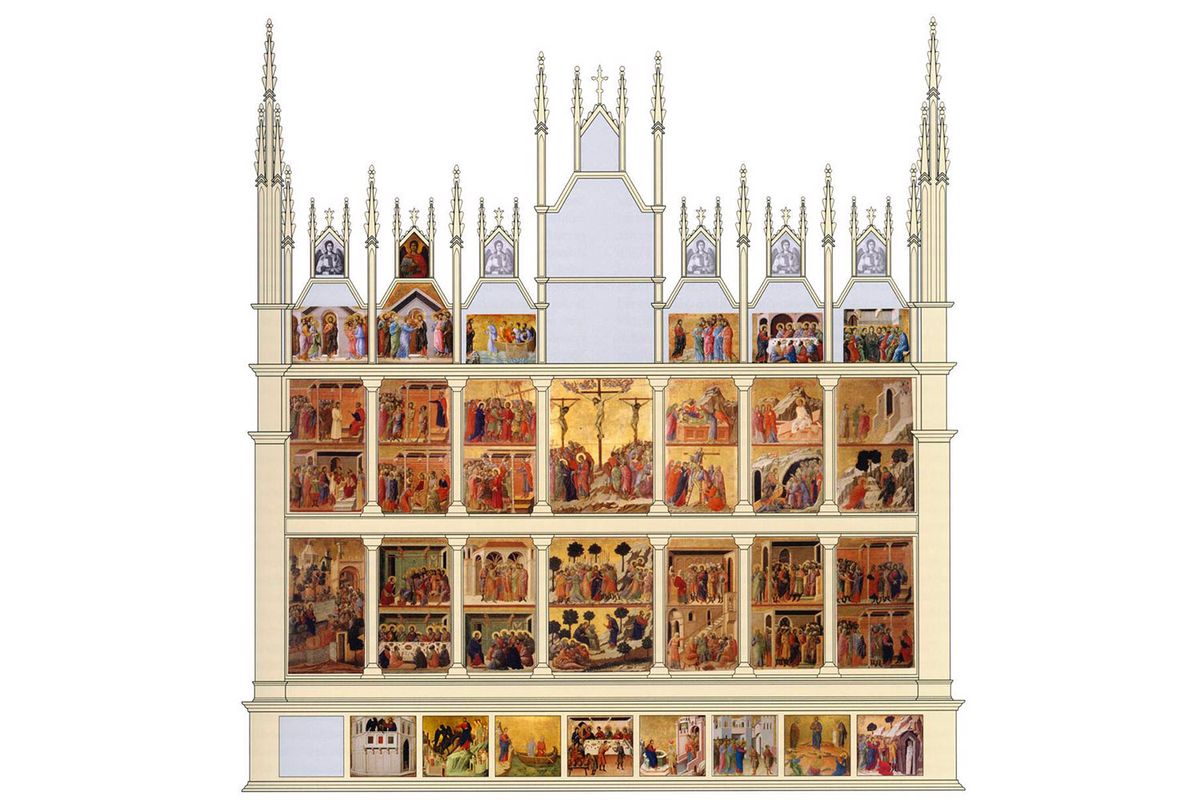 A digitized reconstruction of panels of the back of the Maestà.
Location

Unlike many cities in Italy that have poorly run museums, Siena by comparison is the height of efficiency which makes for a very pleasant touring experience. To visit her most important sites, and you must, a single ticket from the MUSEO DELL’OPERA will give you access to eight museums, which includes the Cathedral, the Baptistry and the absolutely stunning Crypt of the Duomo.